Henry on Top of the World

As the youngest of five brothers, I always thought that when I had a family I would have five kids. I loved our brotherly banter, the hubbub of five, stuffed… 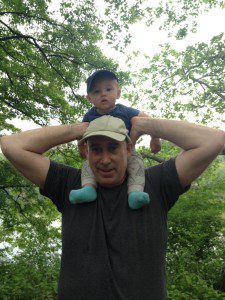 As the youngest of five brothers, I always thought that when I had a family I would have five kids. I loved our brotherly banter, the hubbub of five, stuffed in a van playing cards, joking constantly; this all seemed like the natural state of what a family should be. But after having two kids by the time I was thirty, I started to second-guess having more. Abigail plus Nicholas did not equal two; more like 4. Between juggling our jobs, daycare, the late night homework sessions, shuttling to and from soccer games, Nancy and I were both fulfilled and exhausted. I pored it all over in my mind. Was two enough? Nancy and I talked about it many times. On the one hand, we told ourselves, it would be nice to have a third baby, but even the prospect of having just one more child seemed overwhelming. We decided that the two wonderful kids we had were enough, a boy and a girl. We were done.

When I neared 40, I had a vasectomy; I didn’t want to chance a pregnancy. In the operating room, the doctor played Lou Reed’s Wild Thing. Before he started cutting, he looked me thoughtfully in the eye and asked, “Are you ready?”

I hesitated just for a second. Then said, “Yes.”

About a month later, the dreams began. I felt myself hugging a child close, the child’s head nestled to my shoulder so I could never see his or her face. I felt the child’s warmth and love. And her sadness and hurt that I didn’t want her. I wept because I knew this was the third baby I could never have, severed from my future by the surgeon’s blade. I felt the child yearning to be with me, silently asking, “Why did you not want me? Why?” The dreams came on regular basis. A horrible longing to see and hold the child I had decided not to have. I wanted so much to hold my third child and see her face. I wanted to raise him as I had Nicholas and Abigail, to see them playing with him. The fact that this could never be was like what I imagined amputees experiencing as a phantom pain in a leg that was no longer there. What had I done? Each time wakefulness neared, I felt the child clinging to my shirt, hugging me, not wanting to let go, but knowing we had to say goodbye, that this life could never be. I said I was sorry. So sorry. I’d wake up sobbing. Then, a few nights later, like a child’s knock on my door, the dream would come again.

I considered having the vasectomy reversed, but decided against it. A lot of times it doesn’t work, and (I told myself, trying to convince the inner me) that the time to have my very best children had passed. I already had the best children. But that didn’t stop the dreams.

Over a period of five years the dreams occurred less and less, almost as if the third child started to give up on me. I didn’t want to play, so she went somewhere else. Or he felt too hurt to keep showing up and not be my real child in life.

Meanwhile, Abigail and Nicholas grew up. In hindsight it’s all in fast motion, but in the moment it was a richly layered experience in real time, the pencil marks on the wall showing their height gradually rising higher like sunflowers in a garden.

Last week, Nancy and I babysat our grandson, Henry, while Abigail and Ryan took their first trip since having the baby. We went for a walk in Central Park, pushing Henry’s carriage along the winding paths. The park was vibrant with all kinds of people bustling through, performers dangling puppets before delighted toddlers, tourists from every country snapping selfies, bike carriages weaving around joggers. It was early May, with beds of pink, red and yellow flowers bursting in patches along the walkways; a really happy place ¬–¬ but Henry was not happy at all. Usually when he’s in the carriage he’s cheery, or he falls asleep. That day, though, he was fussy – possibly from a tooth coming in. Nancy and I had to take turns carrying him to stop the crying. At one point, remembering what I used to do with Abigail and Nicholas, I put Henry up on my shoulders. I’m six foot six inches tall, so Henry had one of the best views in New York. He quieted down as we walked along, making cooing sounds and tapping the top of my head.

This is the part of the story where it’s tempting to tie everything up with a bow, but real life doesn’t fit so neatly in that box. I know the third child who visited me in my dreams will never be, and perhaps never was. Maybe she was my remorse at having to close the door on parenthood, and I know that he may visit again when I’m 90. And that’s ok. I can live with that. When you love your kids, you’re carrying on the love your own parents gave you, and that cycle of giving and sharing continues. It is in fact unstoppable. Henry, sitting on my shoulders on top of my world, smiling up at the trees and the big buildings and the great sky over Manhattan, made me feel content, and at peace with all my decisions that led to that moment. And a day later, when it was time to go back to Boston, I gave Henry a hug, and said goodbye.

END_OF_DOCUMENT_TOKEN_TO_BE_REPLACED
6 Comments on Henry on Top of the World
Sign up now to get updates on great new stories!