When I was growing up our house in Lexington had music flowing out of every window; my brother Nick practicing string bass or singing at the piano, Charlie’s rock and… 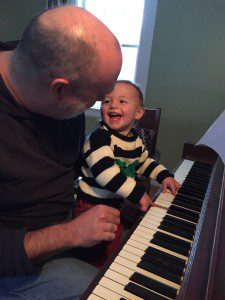 When I was growing up our house in Lexington had music flowing out of every window; my brother Nick practicing string bass or singing at the piano, Charlie’s rock and roll guitar, my mom’s accordion being played with wheezing gusto, my dad’s booming baritone – “This land is your land…”, or me playing trombone, or singing Bing Crosby Tunes like Pennies from Heaven. The piano was front and center as you entered the house, with various instruments leaning against it like pals. On Christmas Eve, every year, we gathered with our neighbors in the cold white darkness, my brothers and I huddling with our mayonnaise jar candle lanterns in one hand, carol music in the other, going door to door to sing Joy to the World and The First Noel and a dozen others. Singing was so much a part of our lives that it seemed perfectly natural to walk through the woods singing and harmonizing, like elves, or doing the same thing in downtown Lexington. It would have seemed strange to us not to sing.

When my dad was in his last days, long after he had forgotten what a spoon was, he would join us to sing all the old songs, remembering every word and intonation.

When my daughter, Abigail, was in the womb, I would sing her the Beetles’ Goodnight song, softly, “Now it’s time to say goodnight…”, and I’d picture her curled in her velvet blanket, soothed to sleep – and I’m sure in the months after she was born there was a hint of recognition as I rocked her to sleep on my shoulder at 2:00 am, “Good night, good night.”

Both Abigail and my son, Nicholas, sang throughout middle and high school; choruses, madrigals, musical theater. They both had high school trips to Armenia with their chorus, traveling throughout the country. While their repertoire of songs was extensive, it was the traditional Armenian folksongs that were the hit of their shows. Older Armenians would come up to them after each show, their faces wet with tears; during the long years of communist rule, they explained, they were not allowed to sing these songs, and hearing this group of American kids sing them – beautifully – was absolute happiness for them, a liberation. They were so grateful.

And here comes Henry. Christmas 2015. 15 months old, busting out of his shoes with energy, nearly sprinting from room to room (although a little unsteady, as if tipsy with life), playing with some cups one moment, the next holding up a set of newfound keys triumphantly and shouting “Keys!”, then chasing a cat beneath the kitchen table. At his age just entering a house is a kind of treasure hunt. I’d show him one thing, a book, a toy, and he’d play with it for a few minutes then move on to the next new discovery. What, I asked myself after a half hour, could I interest Henry in next?

I went into the living room and sat down at the piano and started to play a simple melody from Beethoven’s Ode to Joy. Henry came into the room, smiling, and I invited him to join me at the piano. I sat him on my lap and kept playing, singing along with the melody. Henry immediately reached out both hands and started banging the keys, as all kids do.

“No, no,” I said, “We don’t bang them. We play them.” I held his index finger and pressed it onto middle C. He giggled happily and, right away, repeated this with another note and another. He actually created a harmony hitting C and E at the same time. We laughed together, “You did it!” I said, “You’re playing!”

As I held Henry and he played the notes, I had the feeling – I guess you could call it a revelation – that Henry was not discovering the piano, but remembering it. The way he held his hands over the keys and extended his fingers, striking down with purpose and delight, the position of his wrists, the pure sounds that reverberated up through the old oak of the piano and the sounding board within.

Abigail captured the moment with a picture: Henry striking a note, perhaps his very first note, and looking up at me with an expression of joy, his Ode to Joy, played as only a fifteen month old could do. Whether he is a budding Horowitz, or simply another one of us – a person inclined to sing on hikes up Mount Washington or through the cool green woods – doesn’t matter. What does matter is that he’s on the path. I think music in some way will be part of his life. And perhaps someday this old piano of mine will be his, and his family’s instruments will lean up against it, ready for another get together when everyone’s gathered around it, not worried about a missed note here or there. The TV will be off. The stupid smart phones will be banished. And if I am very lucky, I will still be there to add my voice to the chorus.

END_OF_DOCUMENT_TOKEN_TO_BE_REPLACED
2 Comments on Ode to Joy
Sign up now to get updates on great new stories!