grandpateddy1
1054 views
Comments Off on The Christening

It’s incorrect to say that time travel is impossible­­, for we travel through it constantly, only in a forward motion. The question becomes, can we see the future beyond the… 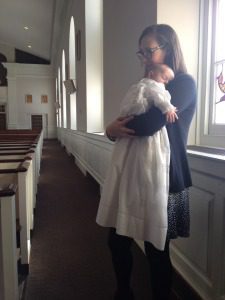 It’s incorrect to say that time travel is impossible­­, for we travel through it constantly, only in a forward motion. The question becomes, can we see the future beyond the present moment. Seeing the future is different from predicting it with any degree of certainty, and in this sense I believe we can imagine the future sometimes very well, with hoped for images coming to mind, and if we are very lucky they come to pass. This was what Henry’s Christening weekend was like for me. It was full of moments that maybe I dreamed a while back when thinking about Henry’s arrival in our lives.

Henry wore the Christening dress that I wore as a baby, that Abigail wore, and that my dad wore – and possibly his father before him, white and flowing with fine lace, a bit of the 18th century with a 2014 baby inside. Abigail held Henry by the windows of the church with the opaque early winter light shining on them. Henry, asleep. Abigail looking thoughtful and loving, a proud mom. During the ceremony, the old Catholic priest dabbed holy water and oils on Henry’s forehead, and shared the symbolic meaning of each. The cool water woke Henry up, and he looked dreamily at us as one cheek rested on Abigail’s shoulder. After the ceremony (or maybe an unofficial part of it) everyone snapped pictures. Abigail and Ryan beamed. Henry let us know he was ready for lunch and kept turning his head to look for the milk truck.

That night, Abigail and Nicholas sat Henry down and performed a puppet show for him using hand-puppets I used to amuse them with when they were little. One puppet was an Amish man, the other a Hasidic Jew, one a nun, each equipped with boxing gloves. The kids enacted a hilarious religious war as Henry looked on, wide-eyed, his arms flailing about like a conductor’s.

Nicholas and I sat with Henry on the couch and read to him. Pat the Bunny never goes out of style. Henry cooed and looked at the pictures, gnawed his hand in saliva-strewed contentment. When I saw the video of us reading to him, I saw a grandpa and realized that was me. And saw a grandson, and realized that was Henry. I traveled through time for that moment, and it was good to arrive there.

END_OF_DOCUMENT_TOKEN_TO_BE_REPLACED
Comments Off on The Christening
Sign up now to get updates on great new stories!