This Memorial Day I am celebrating two towering figures in my life and the unforgettable wisdom they shared with me. My grandfather, Frederick Fish (always Gramp to me), was an…

This Memorial Day I am celebrating two towering figures in my life and the unforgettable wisdom they shared with me.

My grandfather, Frederick Fish (always Gramp to me), was an American pilot in World War I. His job was to fly over the trenches and take photographs that could be used for military intelligence – a pioneering use of what became known as aerial reconnaissance. I remember seeing a picture he’d taken over Verdun (one of the more notorious battlefields), showing a hellscape of shell craters and smashed trees. Gramp was tall, with an aquiline nose and piercing eyes, always eager to tell stories or sing a song, one hand behind his back while the other accentuated his words like a conductor. In World War II he became a colonel in the Air Force, stationed in England. 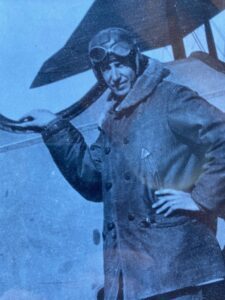 My grandfather, Fred Fish, in World War I.

My father, William (Bill) Page, studied radar in grad school at Harvard and put his knowledge of the nascent technology to use as a lieutenant aboard the U.S.S. Burleigh, an attack transport ship in the Pacific theater in World War II.

On the rare occasions when dad talked about his war experiences, he’d recount the horrors of the battle of Okinawa.

His long face would get a steely, almost detached look as he told of his ship being dive-bombed by kamikazes, the men shouting for smoke to shroud the ship, seeing the planes hurtling towards the ship—so close he could see the fanatical eyes of the pilots—the deafening explosions, a leg floating in the water. I never fully realized just how traumatized dad was by all this throughout his life, an inner demon that would show itself unexpectedly. The color red sometimes made him unhinged with terror. I remember once my mom handing him a bowl of cereal in a red bowl; his face became a horrible mask of clenched teeth and deeply furrowed brow and intense glaring eyes and he shouted, “Blood! Blood!” 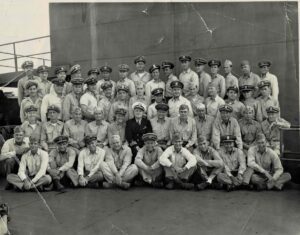 Gramp and my dad were very different people. Gramp was a lifelong Republican, a salesman, a football fan and fisherman. My dad was an intellectual Democrat, a chemical engineer who read voraciously. But through their very different stories ran a shared thread of wisdom that became woven into my memory and thoughts on war.

When I asked my dad what his takeaway was from all his experiences, he looked very thoughtful for a minute, then said quietly, “There’s always a way to rationalize cruelty.”

Dad felt terrible guilt over the atomic bombings of Hiroshima and Nagasaki. Even though the bombings may have shortened the war (and he might have died in an invasion of Japan), there was simply no justification for incinerating children. “War was the stupidest thing I’d ever seen,” he’d say.

Gramp’s thoughts on war were less direct, but just as powerful.

One Easter Day in 1969 we gathered at my grandparents’ house, stuffed ourselves on ham, potatoes, peas—and many pieces of pie—then sat in the living room of their ranch house. Gramp was a master at holding court, sitting in his wing-backed chair, while all around him sat me, my four older brothers, and three cousins (two of them young men). We wore jackets and ties. Somehow the topic of the Vietnam War came up.

“Boys,” Gramp said, “Let me tell you. I was in France in World War I. Well, they called that ‘the War to End All Wars.’ But that wasn’t the end of it. World War II came and we had to go back and fight again.” He raised a finger and wagged it, “You’d think that would have been the last one, but then we had Korea. And now we have Vietnam.” He looked at us intently, all these boys and young men gathered around listening in rapt attention.

“All I can tell you,” Gramp said, “is that it’s always the old men who start wars, and the young men who are sent off to fight them.”

Gramp never told us not to go to Vietnam. Two of my older brothers were eligible to volunteer or be drafted. I was too young. But everyone in the room drew their own conclusion.

Here’s my take. To honor our veterans, I mean really honor them—not just say the words “Thank you for your service,” we need to listen to them. Through hearing their stories and sharing them with our children and grandchildren, we can find the peace that every generation has longed for, and perhaps in the process create the greatest generation of all.

END_OF_DOCUMENT_TOKEN_TO_BE_REPLACED
No Comments on Veteran Wisdom
Sign up now to get updates on great new stories!