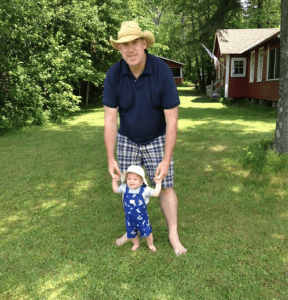 There is a point when babies go from babyhood to boyhood. One minute, seemingly, they are bundles of pink, interacting with us through howls and smiles, eating and pooping and peeing, and the next they are people. This transformation happens all the faster when observed from afar, as a grandparent. We don’t always have a chance to see the micro-moments building up to the change. We get a photo on our phones that says, “He took his first steps today!” And a video where he says, “Dad!” And we think, “Wow, that was fast.” It seems like such a miracle, even though this is happens a million times a day with a million children, and it always has, and that’s why there’s humanity.

With Henry, it was month 11 when it all started to happen. At the beginning of that month (August) there were the first steps, and an increasing number of words. And by the time I saw him at the end of the month for our family vacation in Vermont, the tentative steps had become more confident; he was practically sprinting. The first words, like “Dad” and “Down”, led to more complex shades of meaning, like “Yellow”. And more than this, much more, there was a recognition in his eyes when he saw me. I was grandpa.

Nancy had a cold that week and tried to limit her contact with Henry so as not to get him sick as well. Which meant that more often than not I was the one on the floor with Henry playing with blocks, stacking one on top of another, or running the plastic trucks across the carpet. Or sitting with Henry in mealtimes, talking with him, handing him the stray nibble of peach or bagel. Henry smearing his hands through the food bits and gooey yogurt, leaning sideways in his highchair, smiling like someone at a bar who’d had a lot of beer. Me commenting on each kind of food, asking what he liked best. Henry saying “na-na” (the closest he could get to banana) as Abigail or Ryan doled our more deliciousness.

In the lake on a warm, sunny day, Ryan and Abigail put Henry in a floating duck. At first Henry looked amazed, almost stunned. What was this? The whole idea of floating on water, the sense of the cool water, the fact that he could run with his feet beneath the surface and never touch ground. As we pushed Henry between us, projecting him across the surface, he smiled and giggled. A very happy duck.

As the week progressed, Henry kept changing fast right before my eyes. It occurred to me that I was also changing. Months ago, when I picked him up, I felt tentative. It didn’t seem like he was fully comfortable with me yet. I was still a stranger. But as each day passed, more and more I smiled broadly when he saw me, and held out my hands and said, “Come to grandpa.” And gradually, a little more every day, he did. He’d walk to me, arms outstretched like mine, and fall into my embrace. I’d pick him up, both of us accepting this now, me no longer a stranger.

On Saturday morning, it was time for Henry to go home to Connecticut. Abigail and Ryan were busy packing up all their stuff – a LOT of stuff. I’d forgotten about the flood of things required to care for a child. It was a beautiful day. I felt sad they were leaving. The week had gone by very fast, and I wished they could stay a few more days. I held out my hands to Henry and said, “Henry! Let’s go for a walk!” I picked him up and walked out into the field in front of our house. It was this field that I had imagined I would walk in with my grandchild back in February when Abigail first told us she was pregnant. The image I dreamed then, with my grandson walking as I held each of his hands, had come true. When I wrote a poem about that dream, I didn’t know if it would be a boy or a girl. So that blank had been filled in. It was now Henry in all his 11 month old glory, walking with me through the grass, his hair slightly ginger, his eyes beaming as he journeyed with me on this adventure.

We came around to the front of the house where, thirty years before, my mom had planted blueberry bushes. The bushes where were now six feet high, with bunches of ripe berries on each branch. I picked Henry up and rested him on my thigh, and picked a berry, “Oh look, Henry!” and popped it in his mouth. He chewed it with delight, and pointed at the bush hungrily, and I gave him another. This was clearly a whole new concept for him, that yummy food wasn’t just something that appeared on his high chair tray. It was out in the world, hanging on branches, and all we had to do was walk out and pick it. I could feel a connection between my mom’s planting the bushes, and Henry – who she never had a chance to see – enjoying the fruits of her labors. If there is a heaven other than the one Henry and I were already in that day, then mom was there, too.

When Abigail’s car was all packed and Henry tucked into his car seat, Nancy and I waved. Henry smiled, paused for moment, then waved back.

Henry on Top of the World