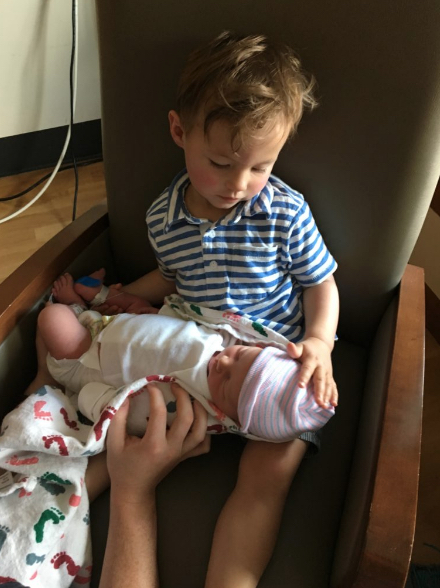 It took me a while to get used to the idea of being a grandfather. When my children were born I somehow was able to plan ahead emotionally. When grandson Henry was born, it was still a shock even though Abigail and Ryan had given us six months heads up. I think this is because you can’t really be ready for something so completely new; the knowledge that this little baby, your grandson, is part of you, is a continuation of the love you have for your daughter, does not come with an instruction manual—and if it did, it would simply say, “Your life is going to change.”

Seeing Henry grow over the past two years has been fascinating and wonderful. Baby Henry morphed with remarkable speed into the young boy who leaned against the glass at the Natural History museum in New York City, consumed with amazement. And that boy started to talk. Brief words at first, “Up” and “Yes.” Then the statement I heard about two months ago when I walked from the kitchen at my daughter’s house to the living room. Henry, in his high chair, pointed at me with his spoon and exclaimed, “Bipa go poop.”

Within a few months of that profound statement, I saw a photo of Henry on his first day of pre-school. He stood on his front steps, smiling broadly, eyes gleaming, brown hair trimmed, backpack at the ready. I thought, oh, my God — that was so fast! Still a boy, but soon to be a young man.

While the speed of this transition set me back on my heels, I was starting to get used to the idea of being a grandfather. I was content with my self-image as an “older man” but not yet “old” by any definition. I have proudly shared baby pictures in meetings and with people who are practically strangers.

We were with our in-laws, Jack and Kally, one sunny day with Abigail and Ryan, when Abigail said, mischievously, “Henry wants to show you something!” She pulled off his sweatshirt to reveal Henry’s t-shirt that read BIG BROTHER. It was like I’d been in a boxing match, laying on the floor recovering from a right hook, and just starting to rise again when struck with this new revelation. My memories of my four older brothers rose up in my consciousness as if John, Nick, Charley and Calvin at that moment joined me there with Abigail. The memories of us being brothers at my dad’s strangely corporate family meetings every Sunday. Watching the original Star Trek on Calvin’s homemade pay-per-view TV. Hanging out with John, closest to me in age, on a summer afternoon at Lake Willoughby, or digging our real-life Hobbit Hole (that’s another story).

Brothers, from my experience, have a unique life-long bond. It starts when you’re very young, when your eldest bother is making pipe bombs to blow up the family playhouse, and continues into adulthood when you suspect he may be the Unabomber. Or stealing a brother’s Playboy magazine when you’re 13, and calling the same brother 40 years later for marital advice.

And here was Henry, just 2, with a brother on the way. I was so happy for him that he’d have a brother to play with. And equally happy for Abigail and Ryan that their house would become even more lively and chaotic.

Six months later, in early September 2016, Charles Patrick Moore was born. Baby Charlie. I entered their hospital room in Connecticut with a sense of déjà vu. I had just done this two years previous. Except not, because the second grandchild is actually a new experience. There is no description for being a grandfather with two grandkids versus one. You don’t become Grandpa squared. To the rest of the world, you are simply the grandfather of two. The thrill of meeting the second grandchild is not as huge as meeting the first. The threshold is smaller. The child, though, is no less profound.

I held Charlie in my arms and sang “Oh Shenandoah”, gently rocking him. He was a long nine pounds, definitely Page-like in stature. He had been eating like a champ and had already started gaining weight. After I’d held him for a bit, it was time for Henry to have his turn.

Having been through the birth of my son, Nicholas, three years after Abigail was born, I know how the new entrant can cause resentment in the oldest. After Abigail had experienced his little brother for a few days, and seen how much she was no longer the center of attention (and how much Nicholas cried) Abigail implored us to “Put him back!” So I was a little worried about how Henry would react to his little brother.

Henry climbed up in his chair and Ryan gently laid Charlie in his lap. Henry looked a little stunned at the sight of baby Charlie—“what is this?” he seemed to be thinking. But he did know, instinctively, that this baby was a precious thing, a strange thing, a new thing, even a delicate thing (he gripped Charlie’s back leg to keep him steady in his lap). Abigail and Ryan pointed their phones and cameras and said, “Say cheese, Henry!” and Henry obliged, looking up and smiling.

He was used to picture taking. But it was when the cameras were put down, and Henry really stopped to look at Charlie, that a stillness came over him. All the other sounds of the hospital, the beeping monitors, the cries of babies down the hall, the chatter of parents and grandparents, faded away, and in this silence there was only Henry looking—really looking—at his brother for the first time. Henry gently touched Charlie on the head. There was no artifice to this gesture. At two, Henry could not have known what to do in this situation. Like me, he didn’t get an instruction book. There was simply something inside him that made him reach out, brother to brother, for that first touch.

I think of all the times in an imagined future where Henry is pushing Charlie on a swing, or taking him for walks in his red wagon. Or running down the stairs together on a Christmas morning to find presents under the tree. They will, with luck, have many such moments together, and over time their bond will increase, but here at this first moment it was the purity and simplicity of the gesture that made me stop and take note. There are the cameras we hold in our hands. And there is a camera in our minds. This first connection, brother to brother, will always be in the photo album of my mind.