grandpateddy1
1023 views
3 Comments on In Praise of Grandmothers 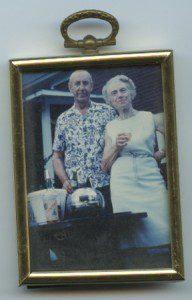 My grandmother, Harriet Fish – always just ‘Gram’ to me – was an extraordinary woman. My Gramp, Frederick Fish, was a successful salesman, and Gram didn’t have to work, but she chose to work hard anyway as a national leader of the Girl Scouts. She met Gramp when they were students at Middlebury College, and married just before he shipped off to France as a pilot in the Great War. She was smart and sophisticated, a lover of poetry and hymns, strong willed and intense as the gusts that blew in off Lake Willoughby to the porch of her homestead. Her hair was red, though grey by the time I knew her. I picture her now at a family Bar-B-Q, 1966. Her cream colored Jackie Kennedy-esque dress tightly fitted to her five foot four, wiry frame; her nose angular, hair pulled back, chin up, one arm planted on a hip, a cocktail in the other hand, grinning at the excellence of the day.

She adored her two children, my mom and my aunt Lois, me and my four older brothers, and my three cousins. Adored us with an unabashed pride. She’d stand amidst my six-foot-six tall brothers and look up at us if she’d come across a forest of redwoods, and proclaim, “Isn’t this marvelous to have all you boys here today? It truly is marvelous!”

Gram was small but tough and rooted firmly in her conservative outlook and Church of Christ faith. She believed in God devoutly, while my own mom (perhaps reacting to her strict upbringing, thought all religion “a bunch of hooey”). Gram’s maiden name was Myers. She’d come from a family that had immigrated from Germany in the mid-1800s, and there had been some conjecture that perhaps the family had been Jewish and converted to Christianity upon arrival in America, something Gram denied.

Gram was a member of the John Birch society until she had an encounter with a member who asked, “Are you Jewish?”

“Well,” the man said haughtily, “You have all the attributes.”

Gram resigned her membership on the spot, forever disgusted by their bigotry.

When my mom had her first baby, Calvin, Gram showed her the ropes with an efficiency and thoroughness worthy of a girl scout merit badge. Baby bathing, feeding, dressing, holding, check-check-check-check. It was the kind of crash course required for any young mother at the start of the baby boom. Good thing, because mom had five of us between 1948 and 1959, all boys. All huge.

Mom made no secret about wanting to have a girl, a yearning that only grew with time after each brother was born. I was her last effort, after which she gave up and got a dog, a chocolate lab she named Holly. When Holly had puppies, mom singled out the females and tied little pink ribbons around their necks. So when my eldest brother Calvin and his wife, Marcia, had a girl – mom’s first granddaughter – she was ecstatic. Mom’s whole life had been dominated by boys and men, all of us tall and constantly hungry despite the giant vats of macaroni and salad and the gallons of milk and roasting meat by the tub and the cornucopia of her garden consumed as if by a marauding hoard, plus the endless stacks of hidden Playboy magazines, the fist fights, not to mention Calvin’s homemade pipe bombs (as adults, my other brothers and I suspected Calvin to be the unibomber and carefully read the manifesto in the New York Times for clues). And suddenly, miraculously, quietly ¬– without any birth pain of her own – here was Laura. A girl at last! Mom immediately began sewing pink dresses by hand.

Mom was thrilled when our first child was born in 1986, another girl! It had taken a generation, but the genetic roulette wheel was finally spinning mom’s way. Nancy and I would have been equally happy with a boy or girl. The big thing for us was that we felt totally clueless in the ways of parenting, and were isolated from our far-off New England families. We lived in a third-floor walk-up in Brooklyn, way before this part of the city was cool, and certainly before we were “ready” to be parents. We’d read all the parenting books, of course, and Nancy had done her share of baby-sitting, all of which amounted to roughly nothing as this little baby girl, this totally new thing – our beautiful Abigail – squirmed and screamed in her crib. Was she ok? Why was she making that noise? Was the baby getting the right nourishment from breastfeeding? I remember that feeling of absolute terror of not knowing, the fear that I wasn’t holding her right, that something might break. When Nancy and I gave Abigail a bath, it wasn’t a joyful thing as I’d thought it might be; it was horrifying. What if Abigail slipped from our soapy hands and went under and got water in her lungs and drowned? At night, as Abigail lay in her bassinet, I’d lay awake straining to hear her breathe, deeply worried she’d stop.

During this time our telephone became so important to us, because in the dark heart of a Brooklyn night, it was our only link to my mom. The phone was our hotline for all things motherly. Nancy’s mom, Dorothy, was a help as well. But there was something about my mom’s surety, knowledge and firmness that was especially reassuring. Abigail, we learned, would not break so easily. Babies had somehow survived bathing and diaper changing and all manner of sickness for millennia, and Abigail would pull through as well.

When we did manage to span the distance between Brooklyn and Northern Vermont where my mom and dad lived, Abigail was soon in mom’s total embrace, riding her hip as she stirred dinner on the stove, being cuddled and kissed, being tucked in and read to at night. It was as if Abigail was mom’s baby number six, the one right after me, and no time had passed at all.

And last but far from least in my grandmother chronicle is Nancy, my wife of nearly thirty years. Nancy exemplifies a new breed of grandmother for our time, Henry’s time. She is five foot seven, with long wavy brown hair, lively and funny and curvaceous and fit and active. She works out a lot and looks ten years younger than her age. Nancy has an extraordinary strength, and above all a belief that “everything is going to be ok.” While others are holding their cheeks in tragic parodies of Edvard Munch’s “The Scream” over the latest insurmountable worry (honestly, that’s me, I own it), Nancy just marches through it all and comes out the other side. It’s like she has her own force field. An avalanche of boulders would just bounce off her.

When Nancy holds Henry, she beams. A wide, joyous smile, eyes lit up. “Hi,” she says, “Hiiiii.” And Henry, no matter what mood he has been in up to that moment, beams right back. He coos with delight. Who would not?

This past week Abigail had a meltdown. She’d been working three days a week as a speech therapist at a school for special needs children. Henry had not been sleeping well, often waking up at 2am and staying awake for long stretches. In addition, his daytime naps had become a struggle because he refused to sleep on his back and would scream bloody murder for hours in protest. If he was placed on his stomach, he’d fall asleep instantly, but the pediatrician was adamant against stomach sleeping because of the danger of SIDS. The numbing fog of sleep deprivation, coupled with the drive to excel at work and prepare for the parent teacher conferences, plus the tiny New York apartment; plus the demanding dog; and the cat that didn’t like the dog and resented the baby (to the point where it took a dump on their bed in feline protest); plus [insert worry x, y,z here] all came to a head suddenly like wires overloading a circuit and Abigail broke down in choking sobs. She felt she was doing it all wrong. She was so busy at work and so incredibly tired she was doing a billion things but none of them well. She didn’t even have time to call back her friends who left messages of support. It was all too hard, too much.

Nancy got on the phone with her and helped her through. Everything Abigail was feeling was normal. Henry’s screaming fits were normal. Abigail herself went through a period where she refused to sleep. Abigail was actually doing a really good job. She was, in fact, a good mom. The grandmother hotline worked again, a line from one state to the next, a voice of experience to guide a daughter through the rough waters. But in a larger sense, a line that extended back to my mom, and Gram, and back through time hundreds and thousands of years, maybe to Eve herself.

Grandmothers, you see, are the glue of the world. They are the ones who have been there, through all the pain and heartbreak and happiness. They raised their children well, and now it’s all coming back to them; the wisdom they gathered as young parents is blooming again. To share and comfort, to be strong, to touch a baby’s head softly so even just the touch makes him calm down. They know what temperature to keep the bottle. They know the meaning of each type of crying, they can read baby poop like mystics analyzing tealeaves to predict the future, the onslaught or retreat of sickness, or whatever needs knowing that Google could never answer or dream or imagine.

They know, I think – all of them, every last one – from Boston to Bombay and all the lands between, that everything, every little damn thing, will be. All. Right.