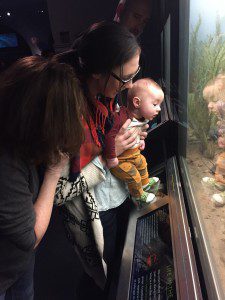 It was a fine January day in Manhattan, the sun and frost vividly bright, as we bundled four month old Henry into his stroller on West 74th street and headed off to the Museum of Natural History, me and Nancy and Abigail and Ryan side by side. When I had suggested to Nancy that we take Henry to the museum that Sunday morning, she was hesitant. “Isn’t he a little young to appreciate it?”

Henry was in his furry brown bear suit with only his eyes peaking out. This level of insulation on a four month old is similar to a space suit worn for a moonwalk. You know there’s a person in there somewhere. Henry went to sleep almost immediately when we started walking, but when we entered the museum he stirred awake, and before long started to get fussy. The side entrance to the museum that allows for strollers leads into a multi-story area devoted to space exploration; a huge bulbous white structure rose above us like a space ship that had recently landed, so Henry in his own furry bear space suit – now with his little arms waving – resembled a tiny astronaut in distress. Abigail lifted him out and rested him against her shoulder, which did nothing to calm him down. The thought that he was indeed too young to appreciate the museum occurred to all of us, but we’d already paid our admission fees and chose to continue our mission to go where this baby had not gone before.

Abigail and Ryan teamed up to peel the bear suit off of Henry and took turns carrying his cranky self farther into the museum. As a grandpa, Boppy, I found myself rediscovering the process of trying to understand why Henry was fussing. Diaper need changing? Hungry? Tired? Maybe, or maybe he just needed time to orient himself and wake up after his journey through the Manhattan outer atmosphere.

We entered the section of the museum devoted to mammals of North America. I remembered being there years before when Abigail and Nicholas were little. So here I was, instantly – it seemed – transported to a future where I was a grandfather, walking possibly across my old footprints to the Great Plains and Rocky Mountains and their myriad beautiful beasts.

In case you haven’t been to the Museum of Natural History in New York, I’ll paint a picture of it for you. The museum, established in 1869, has wood paneled walls that open onto glass enclosed vistas designed to showcase animals in their natural habitat. The glass for each showcase is around twelve feet high, and as much as twenty feet wide, the taxidermied animals frozen in poses like photographs you’d see in National Geographic, amidst rocky landscapes or grassy vegetation, with beautifully painted dioramas that extend far off into the distance. The rooms with these exhibits are kept dim and mysterious, so that when you come upon a showcase the light of the whole scene glows with an invitation to explore.

And it was at the first case we came to that the natural world in all its glory was revealed to Henry. I can’t recall now if it was bison, or elk, or panthers shimmering behind the tall glass; I think I can’t remember that detail because it was the look on Henry’s face that transfixed me. Abigail held him up by the glass so that his feet stood on the railing; his whole face was transformed with wonder. His eyes went wide, his little jaw dropped slightly as if to say, “Oh!” I remembered my dad telling me that we adults should “never lose our capacity for wonder,” for it was this ability to see the world with wonder, with all its magic, that allowed us to be fully alive and discover new things with the same delight as a child. Henry was lit up like a twenty-pound living light bulb of wonder. It was all so new to him, so extraordinary. What was this THING before him? There was no point of reference for this vista, this animal (what is an animal anyway?). It was just pure awe. It was amazing for Henry, and it was extra amazing to see him being so amazed. We snapped a picture that captured the moment; the best thing about the picture is the reflection of Henry’s face in the glass.

We moved on and visited other animals and other places, and while Henry was curious, it was clear watching him that these other animals, just as beautiful as the first one he saw, could not equal the first one. There is, after all, in all our lives, only one first moment when we see the first giant and amazing animal shining behind the tall glass in one of the world’s most beloved museums. After that the sensory bar has already been raised and it might take something on a whole new level to bring back the wonder that my dad cautioned me to never lose. But I do think, for me, that I have surely not lost my capacity for wonder, for that’s what I felt when I saw Henry at the museum.

Henry got cranky again about an hour later, as babies do (diaper, hungry, tired?), and Abigail bundled him back into his bear suit for the journey back to West 74th. Ryan and I peeled off from the expedition along the way to get takeout from Shake Shack. It was one of the best burgers I’ve had since I was a kid.