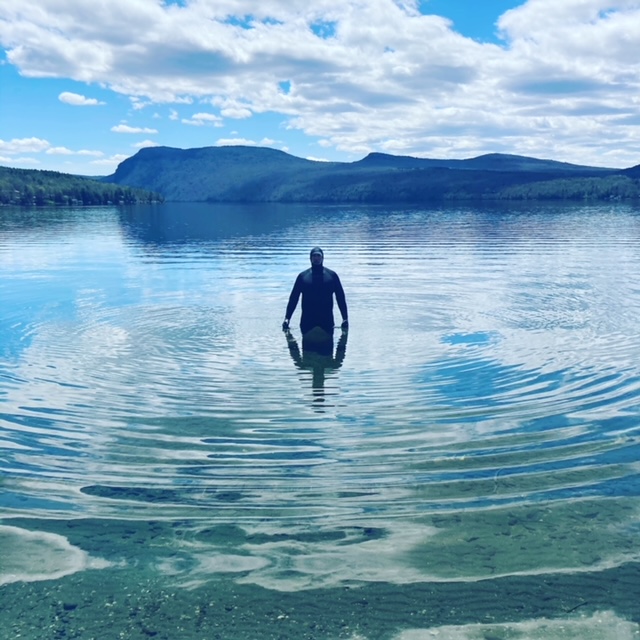 The Joy and Stigma of Being a Grandfather

The level of joy that goes with being a grandpa is off the charts. But to be truly honest, it’s not all sunshine and rainbows.

When I first learned I was going to be a grandpa, the joy I felt was intermingled with something like alarm. I was, I reminded myself, only fifty-five years old. The only grandpa I ever knew was well into his seventies, a wizened retiree and veteran of two world wars who fled Vermont winters for sunny Arizona. Suddenly I was going to be in the same club. How was that possible? I’m certainly not the only grandpa who’s felt this way. Greg Payne, who produces the Cool Grandpa podcast, has related a similar story.

Women also struggle with this major life stage milestone. Just hearing the terms ‘grandpa’ or ‘grandma’ can smash our self-image like a walking cane thrown through a plate glass window. “My mom’s hot and she didn’t want to be called Grandma,” reports Gwyneth Paltrow.  Her mother, the actress Blythe Danner, insisted on being called Woof instead. Think about that for a moment. A word associated with dogs is preferable to one that conveys grey hair.

In my case, while I didn’t relate to the elderly image of grandfatherhood, I did fully embrace my role. I told everyone about it. That included my partners at the marketing agency I co-founded and all our employees. I even shared baby pictures of my grandchild through emails and Slack. When I was in my twenties I eagerly shared baby pictures of my daughter with my co-workers at the Manhattan ad agency I worked at. Why not share photos of my grandkid to people who worked for me?

Big mistake. Or, to put it a better way, what happened next was bad. But it wasn’t my fault.

Right around the time I made my grand pronouncement to employees, the thirty-something general manager of my agency shared a memo with me and my partners about the future of the firm and things that could change. I was genuinely interested in what this bright young fellow had to say. That was until I got to the part of the memo where he stated that I was on a faster track to retirement than the other co-founder of the agency—a man virtually the same age as me.

I was indignant and angry. And I concluded—rightly, I believe—that the reason I was pegged as ready to jet off to sunny Arizona for my winters was because this employee knew I was a grandpa. Retirement is just what grandpas do, right? When I confronted my employee about this he muttered a few evasive reasons for my faster-track retirement, none of which included my being a grandpa.

Would it have helped if I’d called myself Woof?

Now that I have 4 grandchildren I have learned a few things. I’m proud of being a grandpa but generally don’t bring up the topic of grandchildren when starting out new client engagements. When I do bring up my grandkids, the response is generally “Wow, you don’t look old enough to be a grandpa!” This is complementary in a way, but also illustrates just how prevalent misconceptions are in our society. The average American becomes a grandparent at age fifty-five, so I was actually right on time. Lots of people become grandparents in their forties.

As I write this, however, it’s becoming clear that maybe I need to unlearn a few things.

I shouldn’t hide the fact that I’m a grandpa. Doing so is a surrender to the stigma associated with this amazing and rewarding stage of life. Nor should I be the least bit happy hearing that I don’t look old enough to be a grandpa. If someone becomes a grandparent—at whatever age—everyone needs to understand that what defines us has nothing to do with how old we are, or how old we may look. It’s about wisdom. Nurturing the next great generation. And yes, joy.

So, here’s an alternate, non-age-related image of a grandfather. It happens to be a shot of me taking a swim using my new wetsuit in an ice-cold lake in early May. Cold water swimming has tremendous health benefits, and it sure beats crowding into a gym. When I’m not swimming I’m running a marketing agency that helps clean energy companies grow, and I’m many years away from retirement.

This is my story. You have yours. If we share our stories with friends and co-workers, the old stereotypes will fade like photos in the sun.

You might ask, what do my grandkids call me? I’m Grandpa Ted. And I’m sticking with it. 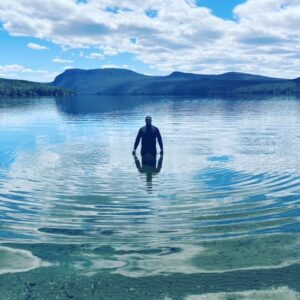