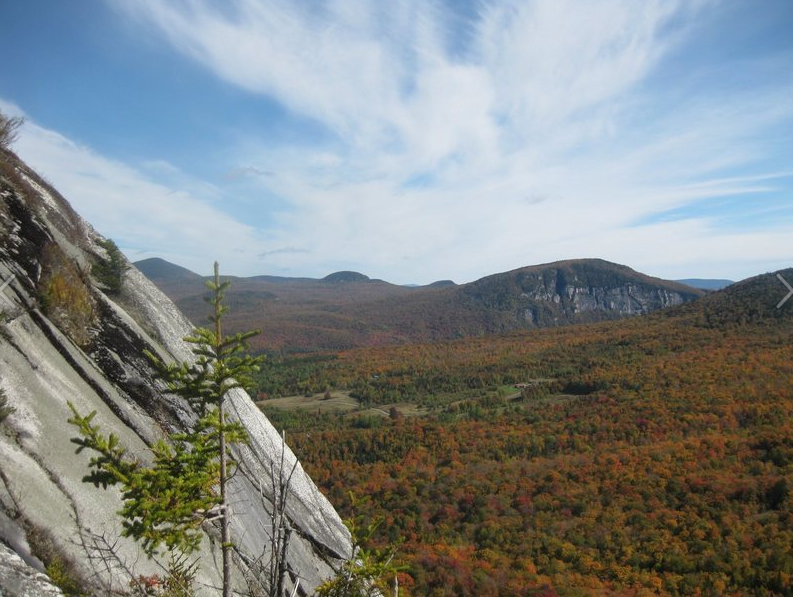 To fully appreciate this true tale, it’s helpful to understand my late father’s love of nature.

William Page, “Bill” to his friends, experienced the deep woods as a kind of church. The soaring birch and maple trees arcing over his path in the forests of Vermont’s Northeast Kingdom formed the spires of a cathedral, the deep green moss and ferns beneath were holy velvet, the gurgle of water sprouting down the brooks were hushed conversations on weighty matters, the hoof prints of deer a sure sign that he was on the right track. The woods were wonderfully spiritual, without a trace of dogma. When I went on hikes with him, he’d often pause to examine a leaf or a curious formation of rocks.

Dad encouraged his many grandchildren, including my Abigail and Nicholas, to stop and listen to nature, because only nature could tell you everything you needed to know.

This was the man, who, at the age of 75, decided one crisp fall day to hike Mount Wheeler (solo) in the town of Westmore, Vermont, overlooking Lake Willoughby. In a land of craggy mountains, Wheeler is especially rocky and definitely not a place for anyone afraid of heights. At its base, the trail flows like a stream up through a stand of sapling maples, but soon a hiker is confronted by cliffs. The white trail markers on trees are replaced by faint and infrequent smudges of white on boulders. Wet moss often spans across a stretch of rock, making the “trail” a challenge for 25-year-olds and grandfathers alike.

After an hour or so of near vertical ascent, the intrepid hiker is rewarded with a long expanse of open rock above the tree line, with only short evergreens here and there clinging to small pockets of earth.

And it was here along this ridge that my dad hiked, filling his lungs with fresh smelling Vermont air, seeing below the broad undulating valley in peak foliage, and a few miles to the West the five-mile stretch of Lake Willoughby bracketed at its Southern edge by Mounts Pisgah and Hor. No doubt he was wearing his customary khaki shorts and red-checkered flannel shirt. His face was long and thoughtful, broad grey eyebrows like the wings of a seagull above brown eyes that sparkled as he hummed a folksong.

Dad paused atop an outcropping of rock along a cliff near the summit, a kind of pulpit, and suddenly, as he put it, “felt the call of nature.”

He unzipped his pants and unleashed a high yellow arc of pee that projected out and down. He followed the arc as it splashed against a rock twenty feet below that was of such a dark green hue it almost looked black in the shade of a pine.

The rock began to move.

Always attuned, as I’ve said, to the wonders of nature, my dad was quite surprised and not a little baffled that a mere stream of piss would make a boulder move, but when the rock stood up the realization that it was a black bear—a really angry black bear—gave him a tremendous jolt.

A casual observer, perhaps an owl perched in a nearby tree, would have been hard-pressed to determine who was more surprised, the bear being splashed by this red-checkered demon above, or my dad, who’s hair stood up and turned a whiter shade of grey.

The growling bear started up the cliff towards my dad.

You don’t have to be an MIT-trained engineer like my dad to know this bear was “pissed.”

In fact, I think he set a land speed record for his age group as he raced down Mt. Wheeler, stopping only briefly to glance back in terror to see if the bear was on his trail, and not thinking to zip his pants until he arrived, safely, back home.

My dad told this story often, making his grandchildren peel with laughter until their sides hurt.

There is no moral to it, no scripture carved in stone. But I suppose we can draw our own conclusions about the wonder of nature, the importance of knowing the difference between rocks and bears, and why staying in shape in your 70’s is a very good idea.

It's Time for the "Green New Deal"