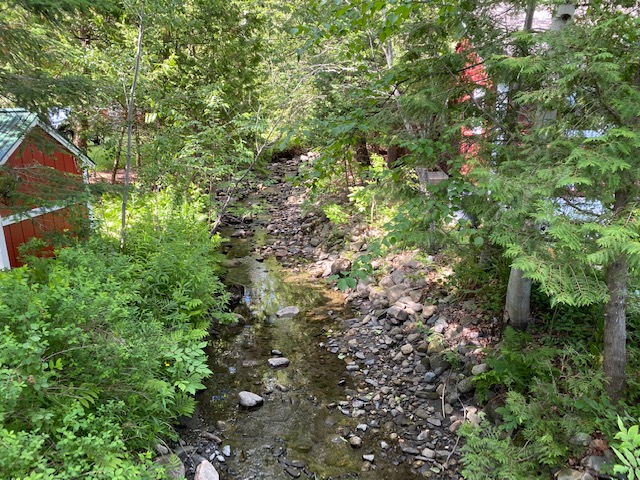 Moving Boulders in the Brook

grandpateddy1
525 views
No Comments on Moving Boulders in the Brook

Author’s note:  This summer as I rejoin my family at Willoughby Farm in Vermont’s Northeast Kingdom I’m reminded of my grandfather. Often when I walk down to the shore and hear the rustling brook that runs through the farm to the lake I’m brought back to a sunny day many years ago when I was helping Gramp with a chore that taught me valuable lessons. Here’s a story excerpted from my book, The Willoughby Chronicles.

I’m lying on the beach reading a Hardy Boys book and Chet’s in the middle of a speedboat race. The sun on my back feels great. I’m not quite hot enough to jump in the lake, but I’m getting there.

“Teddy!” It’s Gramp. Oh, shit, I think, he’s found me. I’m 12 and under his employ this summer to help take care of the family’s rental cottages and land by the shores of Willoughby Lake. When I’m needed, I have to help. That’s it. And there’s no point trying to complain with Gramp. A biplane pilot in the First World War, he flew reconnaissance missions to photograph the enemy lines. In the Second World War, by then a full colonel, he helped Eisenhower prepare the Allies for the invasion of Normandy, checking supplies, stocking warehouses, and generally making sure all the i’s were dotted and t’s crossed.

This is a man who knows how to get the job done.

He’s used to having his orders followed. Even now, bent with 70 years of living, Gramp’s presence is commanding. He’s tall, with a prominent nose and sharp eyes shaded by his long-brimmed khaki cap.

“Teddy, there you are. I need your help in the brook.”

Gramp is leaning his weight against a thick steel crowbar longer than he is. I can’t imagine what could be wrong with the brook, but all I can manage to say is, “Sure, Gramp.” I put on an old pair of sneakers and follow him.

The brook is always cold, even on the hottest days of August. Cedar and birch trees lean over the banks and shade the clear water and the tumble of rocks. Some rocks are thick with a cushy green moss, some are polished by the current. On either side of the brook, tucked beneath tall pines, my grandparents have built barn-red cottages with fieldstone fireplaces and views of the lake—rental cottages that have to be cleaned each week in preparation for a new crop of summer tenants. Today, Gramp stands on the bank of the brook and hands the long steel bar down to me. I’m up to my ankles in the freezing water, still wondering what on earth Gramp is up to. He peers down into the water, one hand behind his back. “Now Teddy,” he says, “all we have to do is move that rock over to there.”

“This one?” I ask, pointing the heavy crowbar at a boulder that must be 400 pounds.

He doesn’t answer. My grandfather must be getting senile; that’s the only explanation. But senile or not, I better do as he says. So I try to lift up one edge of the boulder with my bare hands. It’s like trying to budge a mountain.

I use the bar as a lever, and with much gasping and grunting I move the rock about four inches.

I grunt more, I push, I heave. Sweat covers every inch of my body except my ankles, which are soaking in ice water. After a half hour or so I manage to shimmy the boulder over to the side of the bank. Finally, I can get back to my book, or maybe take a swim.

The rock he’s pointing at looks like something out of Stonehenge.

I stare at it for a second, imagining Druids performing ceremonies at its base. My protest is breathy and worthless. “That’s an awfully big rock, Gramp.”

“You can do it,” Gramp says. “Just move it over to there and we’ll be almost done.”

At long last, after seven hours in the brook, Gramp looks me in the eye and says, “Teddy, there’s no substitute for hard work.”

I smile and look down into the shady water. The current is swift and straight right through the center of the brook. And the banks are lined with sturdy boulders that will prevent erosion of the valuable land. This year the spring floods will do no harm. Gramp adjusts his cap and walks off with the crowbar. “Just dandy,” he says. “Wonderful. We’re all done.”

What are lessons you learned from your grandparents? Please post a comment below with a lesson or two so we can learn from each other and help nurture the next great generation.

The Mouse Autopsy: How Grandparents Can Nurture the Next Great Generation.